In most models I have seen, ridership and mode choice are assumed to be symmetric: if I take the bus to work, I will also take it back home. Of course those models distinguish home from work: if a bus is full inbound in the morning it’s not expected to be full outbound in the morning. But the assumptions are that if the bus is full inbound in the morning, it should be full outbound in the afternoon. To a first-order approximation this is fine, but there are multiple situations in which people can choose differently in each direction. This is less relevant when discussing cars and bikes, because if you use them in one direction you must use them in the other, but it’s relevant to car-share, bike-share, various kinds of buses and trains, walking, and flying.

Most of this post will take the form of anecdotes. I have not seen any model that accounts for these cases, or any discussion elsewhere. The only exception is when large changes in grade are involved: people walk or bike down more easily than up, and this means that in bikeshare systems, the operators sometimes have to tow bikes back to high-elevation neighborhoods because people persistently take them downhill more than uphill. However, in addition to asymmetry caused by physical geography, there’s asymmetry caused by urban layout and transit system layout, as well as asymmetry caused by different characteristics of trips. 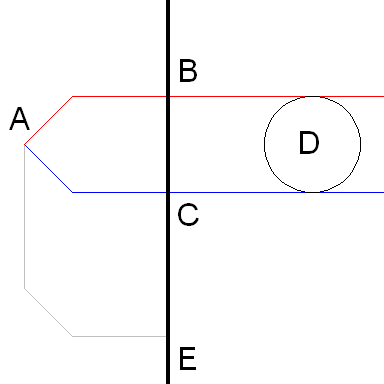 Consider the above image of a transit network. Point A is a major destination; area D is a neighborhood, and point E is an origin. The thick black line is a rapid transit line, passing through and stopping at B, C, and E. The red and blue lines going east from A are frequent rapid bus lines. The gray line going from A to E is a lower-grade bus line: less frequent, and/or slower.

In this image, traveling between A and either D or E, the frequent buses will be more useful going away from A than toward A. For an A-D trip, if I live in neighborhood D and travel to A, then I need to choose which of the two parallel streets to stand on, whereas going back from A to D, I can stand at the bus terminal and take whichever bus comes first. For an A-E trip, if I live at E and am going to A, then again I need to choose which of the two bus lines to use, that is whether to get off the rapid transit line at B or C, whereas going back this is not an issue. On the margin, I might choose to take the lower-grade but direct bus from E to A but not back.

Neither of the situations is hypothetical. When I went to college at NUS, my situation was similar to the A-E case: while the subway has since reached campus, in the mid-2000s the campus was connected by buses to two separate subway stops, Clementi and Buona Vista, and although some parts were definitely closer to one than to the other, the connecting buses served all parts of campus relevant to me. There was no equivalent of the gray bus, and I’d almost always take a taxi to campus, but usually take transit back. Now that I’m in Vancouver and work at UBC, where bus lines converge from parallel east-west streets, my situation is similar to the A-D case, since I can take Broadway buses as well as 4th Avenue buses; there is no alternative to the buses for me, but if there were, for example bikeshare, or walking if I lived closer to campus, I might well use it.

In those examples the asymmetry is for the most part unavoidable, coming from urban layout. In Vancouver, there are multiple east-west streets on the West Side that deserve frequent bus service. Consolidating everything on one street can come from the opening of a Broadway subway to UBC, but because the asymmetry is a second-order effect, the main argument for the subway has little to do with it.

Some bus and train stations are notorious for being unpleasant to wait at. Tel Aviv’s Central Bus Station is dark and labyrinthine. In New York, Penn Station and Port Authority are both unpopular. Many older airports are infamous for their poor amenities and confusing layouts. Because people need to wait going outbound but not inbound, this could affect mode choice.

In Vancouver, UBC has two separate bus loops, one for generally express diesel buses, and one for local electric buses; each loop has buses going on multiple streets, as in the above image. I find the diesel loop noisy and disorienting, and therefore avoid it, waiting at the electric loop or the next stop after the loops. Therefore, I usually take electric buses back home from UBC, while I almost always take diesels toward UBC. I have no direct experience with Kennedy Plaza, but other Providence-based bloggers think little of it; I think it was Jef Nickerson who noted that buses going on the same trunk routes are not co-located there. This could induce a similar asymmetry.

It gets worse when bus stops do not have shelter from the elements. Sheltered stops should be included in any bundle of best industry practices, but when they are present only downtown or at major stations, they can bias me to take the bus in just one direction.

Transit agencies can eliminate this asymmetry by making their facilities better. Usually the cost of shelter, clear signage, a bus bay layout that makes identifying the correct bays easy, and similar improvements is negligible, and the benefits are large. Of course, independently of any asymmetry there is no excuse for not having passable facilities, but in some cases, such as the UBC diesel loop, the situation on the ground is worse than it appears on planning maps and this worsens the passengers’ experience.

For some trips – going to an airport or intercity train or bus station, going to a meeting, going to class, going to a workplace where I need to be there at a specific time – there’s a more pressing need for timeliness in one direction than in the other. This biases in favor of more punctual or faster vehicles, even if they’re more expensive or less pleasant. This manifests itself in airport choice (when flying out of New York, I strongly prefer rail-accessible JFK, while my preference for flying in is much weaker), willingness to transfer to save a few minutes of trip time, willingness to ride a more expensive but faster train (for example, the LIRR versus the E), and bus versus train decisions (trains are almost invariably more reliable, often by a large margin). The few times I used transit to get to NUS, I used the subway, whereas when I went back home I’d often use a trunk bus, which was slower but had a station much closer to where I lived.

In this case, there’s not much the transit agency can do. If the bus versus rail issue is persistent, the best thing that can be done is encourage more mixed-use zoning and more symmetric morning travel demand, so that buses would be used in both peaks and not just in the afternoon peak and vice versa for trains.

To the extent that the transit activist community has an opinion, it is strongly against one-way pairs, going back at least to Jane Jacobs’ criticism in The Death and Life. I’ve written briefly about them; Jarrett has written more extensively. One more issue is that if a bus route runs one-way on different streets (as a consistent one-way pair as in New York, or in a more complex arrangement as in Tel Aviv and Singapore) and I live closer to one direction than to the other, I might take it in just one direction. In Tel Aviv it was not a major problem because the bus I took to middle school run two-way in the segment relevant to me, but in Singapore it was an issue in both middle school and college: I lived next to a very wide one-way street without nearby crosswalks, and getting to the other direction of the buses required crossing it and walking some extra distance; this helped bias me for taking the bus only in the return direction.

The Effects on the Margins

Since asymmetry is small enough an effect that models can ignore it and still come very close to predicting actual ridership, its effect on transit planning is only on decisions that are very close to begin with.

I believe the most common case is the one in the image. A city that transitions from an idiosyncratic network of infrequent direct buses to a regular frequent grid where passengers are expected to transfer needs to decide which of the infrequent buses to keep. It might even have a few peak-only express buses it is considering keeping. In this case, it’s useful to note in which directions the infrequent or peak-only buses are more likely to get passengers, and potentially have an asymmetric number of trips on those in each direction, recycling the equipment for nearby routes whose asymmetry goes in the other direction.