In my post about large-diameter TBMs, I proposed using them to bore Boston’s North-South Rail Link. Like the official plan, this calls for two pairs of tracks, one feeding Back Bay and thence the Providence and Worcester Line and the other feeding the Fairmount and Old Colony Lines. Since there are three sites for stations – South Station, Aquarium (for the Blue Line connection and the north end of the downtown office cluster), and North Station – this calls for a design in which the middle station has right-way cross-platform transfers, and the two end stations have wrong-way cross-platform transfers. Here’s a diagram, consisting of half this arrangement. Top end denotes either North Station or South Station, bottom end denotes Aquarium. 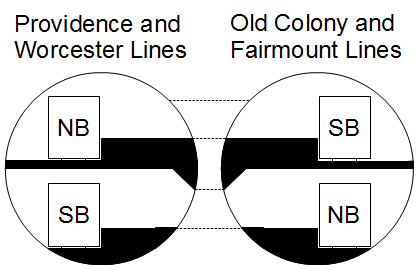 The assumed bore diameter is 12 meters, which corresponds to 1 meter = 16 pixels. The dashed lines are galleries punched at regular intervals into the two bores, connecting the platforms at stations. The assumed operating speed is 90 km/h; this requires a curve radius somewhat higher than 300 meters, about the lowest that can be achieved beneath the Central Artery, assuming no underground surprises.

Moving one track aside, as done between the second and third image and between the fifth and the sixth, requires 3.4 meters of lateral displacement, which at this speed is almost all curve spiral rather than full curve, encouraging using a higher curve radius and shorter spirals. Near the lower limit of the curve radius that permits 90 km/h, the spirals would be longer than the curve itself. With a 1,000-meter curve the track would do the transition in 118 meters. Switching the heights of the tracks, as done between the third and fifth images, requires 5.5 meters of vertical displacement (possibly a bit more, depending on catenary clearances, but certainly not more than 6 meters); I can’t find information about vertical curve radius at low speed, but if the same vertical acceleration as at high speed works, then using Swedish standards, 1,300 meters works, in which case, with EMU-friendly 4% grades, the transition requires 190 meters. 118+190+118 = 426, less than the distance between each pair of stations, if not by the most comfortable of margins.

The advantage of this configuration is that people making diagonal trips, such as between Framingham and Braintree, could transfer cross-platform at South Station. With two stations, as is the case in Singapore for the transfers between the North-South Line and East-West Line, passengers on one of the wrong-way pairs would need to travel one station farther than they have to on each line; with three, passengers between two points on lines north of Boston feeding two different tubes, for example Salem and Waltham, could transfer cross-platform at North Station.

Finally, the reason for two tubes rather than one is that it makes the portals simpler, especially at the southern end. I discussed above the transitions between different configurations of tracks inside the tube, but the transitions from an at-grade two-track line to a two-track tube with one track above the other require more vertical displacement, and this favors two separate portals to the south, one pointing at Back Bay and one pointing due south toward Fairmount and the Old Colony Lines. Merging the two bores underground is possible, but the cost differential with just doing two bores all the way may not be enough to justify the reduction in capacity.