I’ve mentioned on Twitter that I’m visiting London. I’m taking a lot of railfan trips, one of which was on Tramlink, London’s circumferential light rail service. Tramlink runs in South London, from Wimbledon in the west to Croydon in the east and thence along several branches to southeastern outer neighborhoods. Much of the route uses former mainline rail rights-of-way that were only partly grade-separated. The trains satisfy all of TransitCenter’s principles for good light rail operating practices, but their ridership is lackluster by the standards of Paris, TransitCenter’s comparison city. Tramlink has 30 million annual riders on 28 km of route, or about 3,500 per km per weekday; Ile-de-France’s system had 900,000 daily riders in 2015 on about 100 km route, or 9,000 per km. My goal is to explain why. One reason involves route choice, but the main reason is lack of development; this problem is very common in other cities, and must be added to the other pitfalls that TransitCenter mentions.

The operating practices on Tramlink are not bad. The frequency is high: every 5 minute off-peak. There’s no fare integration with the proper rail network (including the Underground), but the buses in London have no fare integration with the trains either and still have high ridership. The connections with radial train lines are decent, though there’s one big miss (with the Northern line) and one smaller one (with West Croydon, which points to train stations that are served by other lines that do get interchanges); the two most important transfers, Wimbledon and East Croydon, require relatively little walking between platforms. The right-of-way quality is high by light rail standards, mostly in a private right-of-way with only a small extent of street running within Croydon; the average speed is 21 km/h (higher than the Parisian tramways – T3 averages 18 km/h). And yet, ridership is not so strong. London is a big city with high rail ridership, so it’s not a matter of a small city underperforming Paris on raw ridership; something deeper is wrong with Tramlink.

Part of the problem has to involve route layout. East of East Croydon, the route has three branches. Two, heading to Elmers End and Beckenham Junction, keep the route’s circumferential character; in theory it should be faster to take mainline rail and change trains than to ride Tramlink, but in reality the mainline routes that would be used have missed connections and therefore are not useful for diagonal trips. Each of these two branches runs every ten minutes, interlining to a train every five minutes between East Croydon and Wimbledon. However, a third route connects East Croydon and New Addington, a radial line, running every 7.5 minutes. This route does not run through to Wimbledon (which would be a radial-circumferential mix) and exists as an orphaned feeder line, sharing tracks with the two main branches just east of East Croydon (thus, creating schedule conflict due to the uneven frequency on the shared trunk).

But the main difference between Tramlink and the Parisian tramways is adjacent density. London is generally a less dense city than Paris. London has two- and three-story rowhouses with back gardens where Paris has five- to nine-story buildings with high lot coverage. The Tramlink route itself is even less dense, passing through suburbia, industrial sites, and golf courses. The Parisian tramways are all in the suburbs (except for T3), but serve high-density clusters, surrounded by a mixture of mid-rise buildings and social housing towers. This is especially true on the workhorse Parisian routes – T1, T2, and T3, which collectively have about three quarters of the system’s total ridership – but even the other routes, while much weaker than the main three, serve denser areas than Tramlink and get higher ridership per kilometer.

Here is a randomly-selected station on T2, Meudon-sur-Seine:

Compare it with Mitcham, one of the more populated stations on Tramlink between Wimbledon and Croydon: 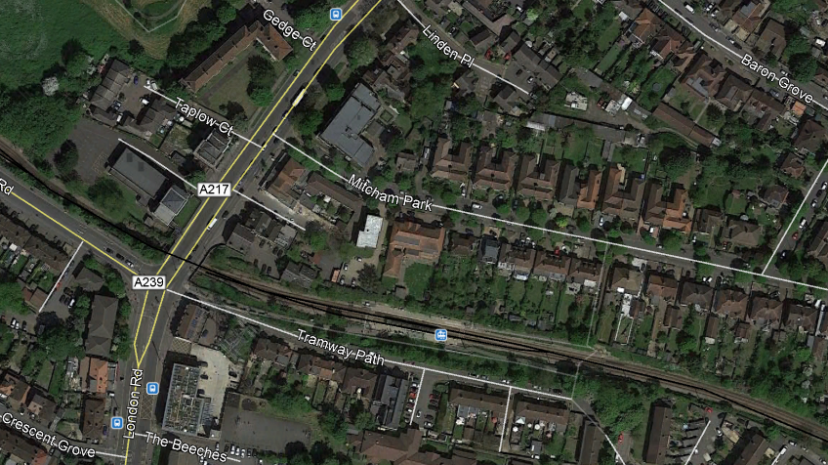 Also compare both with the site of the missed connection with the Northern line, Morden Road:

I want to make it very clear that the two satellite maps of Mitcham and Morden Road are not representative of all of South London, certainly not when weighting by population. East Croydon is full of mid- and high-rise TOD, and to some extent so is Wimbledon; the two stations rank fifth and sixth in ridership in London excluding the Central London terminals. The problem is that a circumferential line is rarely used over a long stretch. The longer the angle subtended on a circumferential line, the more favorable it is to take the radials and transfer.

Paris is full of express trains, represented by the RER. But T3 misses nearly all of the RER connections, which weakens the route but also means that there is no express alternative on the outer margin of Paris; but one would still not take it all the way, especially since there is a forced transfer at Porte de Vincennes. But T1 and T2 have better RER and Transilien connections. The high density all along these routes, and not just at widely-separated key junctions, ensures that there is high demand even on short segments.

In fact, there is circumstantial evidence that T1, T2, and T3 have extensive short-range ridership: their ridership levels per kilometer are very high (respectively 11,000, 12,000, and 15,000 per weekday), and if they had low turnover they would not have capacity for such high ridership. New York has 15,000 weekday subway riders per route-km, and this is with long trains, extensive four-tracking, and higher peak frequency than on the Parisian tramways. It’s hard to imagine comparable ridership levels on a surface tramway without very high turnover, which I have in fact observed riding T3.

In contrast, I saw relatively little turnover between Wimbledon and East Croydon on Tramlink. I saw some, generally involving a small net decrease in passengers on the tram at the first few stations past Wimbledon, but a large proportion of passengers who got on at Wimbledon stayed on until Croydon. To them, the tram is perhaps a slower but cheaper alternative to mainline rail. Some would also ride until one or two stations before East Croydon, within the built-up cluster of Croydon; perhaps their exact destination was closer to one of these tram stations than to East Croydon, where the tram loses a lot of time due to circuitous street running.

Reinforcing the importance of turnover, the tram was crowded. I took it at 4:30 in the afternoon, on the shoulders of rush hour, and it was standing-room only for my entire trip, with considerable crowding among the standees for the first few stations. And yet, despite the crowding, ridership per kilometer is a fraction of that achieved by Paris’s top three tramways, which do not appear more crowded.

I wrote about turnover in the context of Vancouver buses, talking about patterns of development along north-south arterials (Main, Fraser, and Commercial) versus east-west ones (King Edward and 49th). Here we see how it interacts with development on a circumferential tramway within the context of a rapid transit network with fast radial lines. It’s common in a large city to have strong demand for circumferential transit but not so much that full rapid transit is justifiable, leading to tramway networks such as Tramlink and the tramways of Ile-de-France. In this context, it’s important to attract short-hop ridership and not just end-to-end ridership, where the tramway would struggle with the radial rapid transit network. This in turn requires the region to ensure that the intermediate stops generate ample ridership, which requires either uniformly high density (as is the case in and around Paris) or a deliberate effort at TOD in the middle.

This is true for more than just tramways. The fundamental fact about Tramlink and the Ile-de-France tramways is that they are slower than their respective cities’ radial rail networks. The same fundamental fact is true of circumferential buses, even in cities where the radial rail network is light rail rather than rapid transit. In theory this could even happen in an all-bus city, provided the buses’ right-of-way quality were such that the radials were faster than the circumferentials; but in reality this is hard to arrange, since buses get stuck in traffic even when they’re BRT, and there’s more traffic near city center than outside.