Two years ago, I wrote a post criticizing subway lines that mix radial and circumferential elements. These lines, for examples Shanghai Metro Lines 3 and 6 and New York’s G train before 2001, contain long radial segments, going from an outlying neighborhood toward city center, but then switch to circumferential mode, avoiding city center and instead serving secondary nodes. Such lines do not get high ridership, because they fail at either radial or circumferential transit. Recently, I was challenged in comments about my support for a mixed line that goes in the other direction: circumferential on the outside, radial on the inside. I would like to talk more about such lines.

Consider the following diagram of a subway system: 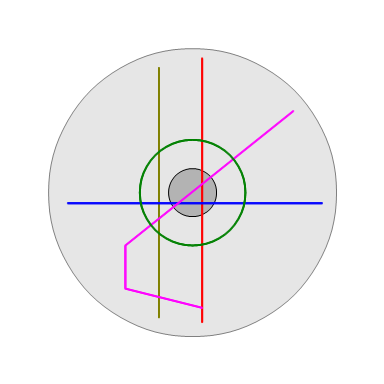 The reason the yellow line is going to underperform in this system is that it fails as a radial: it does not go to city center, which has the largest concentration of destinations for transit users. People who have equal access to the red and yellow lines, north and south of city center, are much likelier to choose the red line, which takes them where they want to go. The green line fails as a radial too, but has the positive features of a circumferential: it only serves relatively nearby neighborhoods, which are likely to be denser and produce more riders per unit length; it connects to every line in the system; it allows people to connect between two radial lines without going through the congested city center; it has no dominant direction at the peak, so trains are unlikely to be full in the peak direction and empty in the reverse-peak direction. The yellow line has none of these features, unless one wants to connect between the western legs of the blue and pink lines.

The pink line still works as a radial. Its northeastern leg is a straightforward radial, but even its southwestern leg  works as a radial for people who live west of the yellow line and wish to commute to city center. In this way, it is not truly a mixture of radial and circumferential elements the way the yellow line is, but is simply a radial with a circumferential element tacked on at the end.

Whether the pink line’s circumferential tail works must be evaluated against two alternatives: build nothing, and build a radial leg. This is because in an incrementally-built transit system, the radial parts of the line are typically built first, and the circumferential tail is tacked on as a later extension. In the no-build case, the pink line’s southwestern leg would simply be shorter than the other radial legs in this system. In the radial case, the pink line’s southwestern leg would look symmetric with the northeastern leg. This depends on the following factors:

The original impetus for this post, as noted at the beginning, is a comment challenging me for my support of an extension of Second Avenue Subway Phase 2, going under 125th Street from the planned terminus at Lexington Avenue to Broadway, with stations at the intersection with each preexisting subway line. I contend that in this case, all three factors above point to a very strong circumferential extension. In order:

Of course, a Second Avenue Subway extension on 125th Street cannot be exactly like the pink line in the diagram above, because a key feature of it is that the circumferential part is not in fact near the outer end of the city. It’s barely 5 km north of the northern edge of Midtown, not even halfway from Midtown to the northern ends of most preexisting north-south subway lines. This is how it can have such high residential and commercial density and strong transit demand. Much farther north, Fordham Road is a very strong bus corridor, with about 4,500 weekday riders per route-km on the Bx12, but this is at much higher speed than in Manhattan, about 13 km/h rather than 5 km/h. An extension of the A east toward the Bronx under Fordham would underperform, because Fordham just doesn’t have that much demand; but 125th does.

The result of this discrepancy is that in a small city, one whose subway system is only about as large as in the diagram, it’s unlikely that such circumferential extensions would work. A radial line built all the way out is going to have as its terminus either a relatively low-density area or an anchor point, such as a commercial center or big housing project, neither of which lends itself to a strong continuous circumferential corridor. A radial line built part of the way to the edge of the city could potentially find a Tehran Avenue or a 125th Street, but if the system is small, with many key outlying neighborhoods still unserved, then it is usually best to keep extending lines outward.

The factors that conspire to make a 125th Street subway extension work are in place precisely because New York already has a large, mature subway network, in which Second Avenue Subway is a relief line. Certainly the projected demand on Second Avenue is very high, but the East Side is already served by a north-south subway 500-600 meters to the west of this line; it’s being built because this subway is overcrowded, not because the East Side has no access. This means that there’s more leeway with choosing what to do with the line once it reaches Harlem – after all, the Bronx subways are not overcrowded, and do not need relief.

Whereas mixed lines like the above-depicted yellow line are always bad transit, mixed lines like the pink line, in which the circumferential part is farther out than the radial part, are potentially an option for large cities that already have many rapid transit lines. They are especially useful for providing connections between closely parallel radial lines when other crosstown transit options are slow, and should be considered as extensions for relief lines, provided the radial lines farther out do not need relief as well.

Update 2018/2/25: the Jubilee line extension in London is a good example of what I’m describing in this post. The Jubilee line is mostly a northwest-southeast radial line, but to the east of Canary Wharf it heads north to Stratford. The radial alternative would be strong (one of Crossrail’s branches is going to provide it, 20 years after the extension opened), but the circumferential option is even stronger: Canary Wharf is an office cluster and one of the Underground’s busiest stations, and needs rapid transit service from all directions, not just east-west as a pure radial would provide.