Many years ago, probably even before I started this blog, I visited family in Hamden, a suburb of New Haven. I took the bus from Union Station. When it was time to go back to New York, I timed myself to get to the bus that would make my train, but it rained really hard and there was no shelter. The time passed and as the bus didn’t come, I sought refuge from the rain under a ceiling overhang at a store just behind the bus stop, in full view of the road. A few minutes later, the bus went through the station at full speed, not even slowing down to see if anyone wanted to get on, and to get to my train I had to hitchhike, getting a ride from people who saw that I was a carless New Yorker.

Fast forward to 2018. My Brooklyn bus redesign plan with Eric Goldwyn calls for installing shelter everywhere, which I gather is a long-term plan for New York but one that the city outsourced to a private advertising firm, with little public oversight over how fast the process is to take. When I asked about the possibility of reducing costs by consolidating stops I was told there is no money for shelter, period. It was not a big priority for us in the plan so we didn’t have costs off-hand, but afterward I went to check and found just how cheap this is.

So let’s say the costs are even somewhat on the high American side, $15,000. What are the benefits?

I’ve found one paper on the subject, by Yingling Fan, Andrew Guthrie, and David Levinson, entitled Perception of Waiting Time at Transit Stops and Stations. The key graph is reproduced below: 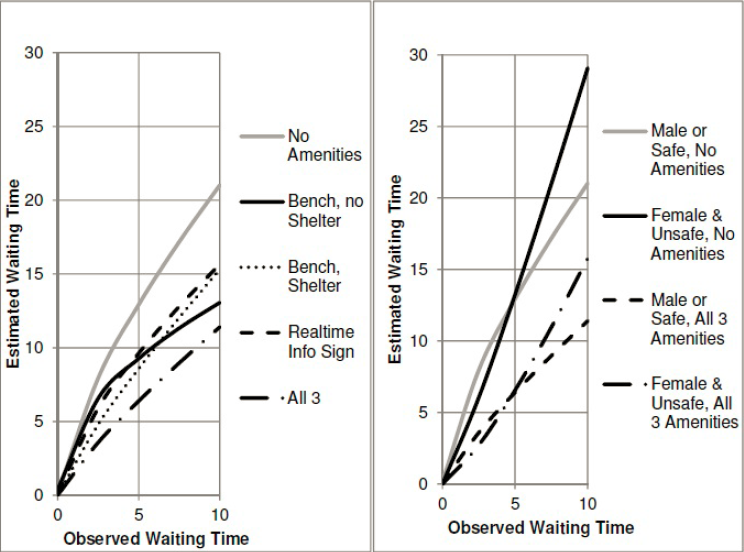 The gender breakdown comes from the fact that in unsafe neighborhoods, women perceive waits as even longer than the usual penalty, whereas in safe ones there is no difference between women and men.

The upshot is that if the wait time is 10 minutes, then passengers at a stop with a bench and shelter perceive the wait as 15 minutes, and if there’s also real-time information then this shrinks to 11 minutes. If there are no amenities, then passengers perceive a 15-minute wait when they’ve waited just 6.5 minutes and an 11-minute wait when they’ve waited just 4. In other words, to estimate the impact of shelter we can look at the impact of reducing waits from 10 minutes to 6.5, and if there’s also real-time info then it’s like reducing waits to 4 minutes.

I have some lit review of ridership-frequency elasticity here. On frequent buses it is about 0.4, but this is based on the assumption that frequency is 7.5-12 minutes, not 4-6 minutes. At the low end this is perhaps just 0.3, the lowest found in the literature I’ve seen. To avoid too much extrapolation, let’s take the elasticity to be 0.3. Fan-Guthrie-Levinson suggests shelter alone is equivalent to a 50-66% increase in frequency, say 60%; thus, it should raise ridership by 15%. With real-time info, make this increase 30%.

What I think of as the upper limit to acceptable cost of capital construction for rail is $40,000-50,000 per weekday rider; this is based on what makes activists in Paris groan and not on first principles. But we can try to derive an equivalent figure for buses. On the one hand, we should not accept such high costs for bus projects, since buses have higher operating expenses than rail. But this is not relevant to shelter, since it doesn’t increase bus expenses (which are mostly driver labor) and can fund its ongoing maintenance from ads. On the other hand, a $40,000/rider rail project costs somewhat more per new rider – there’s usually some cannibalization from buses and other trains.

In New York, there are 13,000 bus stops, so on average there are around 180 boardings per stop. Even in Rhode Island, where apparently the standard is that a bus stop gets shelter at 50 boardings (and thus there is very little shelter because apparently it’s more important to brand a downtown trunk as a frequent bus), there are 45,000 weekday riders and 3,000 stops, so at 15 riders per stop it should be fine too put up shelter everywhere.

The only type of stop where I can see an exception to this rule is alighting-only stops. If a route is only used in a peak direction, for example toward city center or away from city center, then the outbound stops may be consistently less used to the point of not justifying shelter. But even that notion is suspicious, as American cities with low transit usage tend to have weak centers and a lot of job and retail sprawl. It’s likely that a large majority of bus stops in Rhode Island and all stops within Providence proper pass the 2.5 boardings rule, and it’s almost guaranteed that all pass the 1.25 boardings rule. And that’s even before consolidating stops, which should be done to improve bus speed either way.

At least based on the estimates I’ve found, installing bus shelter everywhere is a low-hanging fruit in cities where this is not already done. In the situation of New York, this is equivalent to spending around $550 per new weekday rider on transit – maybe somewhat more if the busier stops already have shelter, but not too much more (and actually less if there’s stop consolidation, which there should be). Even in that of Providence, the spending is equivalent to about $6,600 per rider without stop consolidation, or maybe $3,000 with, which is much better than anything the state will be able to come up with through the usual channels of capital expansion.

If it’s not done, the only reason for it is that transit agencies just don’t care. They think of buses as a mode of transportation of last resort, with a punishing user experience. Cities, states, and transit agencies can to a large extent decide what they have money for, and letting people sit and not get drenched is just not a high priority, hence the “we don’t have money” excuse. The bosses don’t use the buses they’re managing and think of shelter as a luxury they can’t afford, never mind what published transportation research on this question says.