Alex Baca wrote a thread on Twitter a week ago, talking about cities and normativity. The key tweet is,

The discourse about ~cities~ is, to me, a big fight against a normative, hegemonic, mostly white, mostly straight dominant culture, which has very clearly not made physical space for people who don’t fit that profile. It sucks, and we’re seeing the effects. 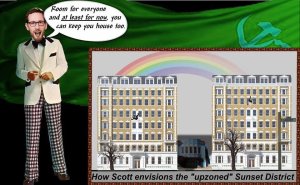 My first reaction to seeing the first picture was “I live in a building just like this.” I lived adjacent to buildings like the ones in the second picture in Singapore (where they’re actually taller) and the French Riviera. I’d already been thinking of different standards of middle-class respectability, in large part thanks to Alex’s thread, but the memes crystallized this so perfectly.

There’s a certain American standard of middle-class normality. A detached house for a nuclear family, with a backyard for the children to play in, and a garage that fits a car per adult. A school that has as few black students as possible without making the white middle class feel too guilty. Social engagements and hobbies that are so common, like a knitting circle, that a suburb of 10,000 can support a group. Everything else is deviant and embarrassing.

This is not the only middle-class respectability standard out there. There’s a competing standard, common in countries without a history of white flight. In cities with good transit, like Stockholm and Paris, generations can grow up and live in the city in apartment buildings and not own cars. Car ownership is still higher in richer areas – transit ridership is very far from universal in Paris, even intra muros – but it’s not mandatory. Detached housing is also less common even among the most comfortable segments of the middle class. The Singaporean dream is to own a car and live in a condo. The Israeli dream always includes a car but runs the gamut on density, from detached houses through mid-rises to high-rise condos in Tel Aviv.

Academia has lower car ownership than other professions of equivalent income, but still exhibits the same difference in mentality. My former postdoc advisor at KTH, a tenured professor, biked to work. At my last math conference, in Basel, one professor complained that when they tried biking to work when on sabbatical at the University of Michigan they got strange looks from the rest of the department. “Ann Arbor is a left-wing city and they still drive,” the professor said. In the United States, math postdocs usually don’t own cars but tenured professors do and often live in the suburbs, even at Columbia.

New York is supposed to have good transit and urban amenities, but for the most part the middle class treats it as part of a life cycle in which families live in the suburbs, rather than as a stable place. The city’s poverty rate is 20.3% per the 2012-6 American Community Survey, but among children age 5-17 it’s 29.3% (and among under-5 children it’s 27.7%). In my largely middle-class American social circle there are a number of New Yorkers, but also a number of people whose parents moved from New York to segregated suburbs when they were born or when they were about to start school. Even on the level of urban layout, there’s a stereotype that the city is not a good place to raise a family, e.g. because the apartments are too small (in fact they’re larger than Parisian ones).

It’s not just a matter of different tastes – some people think respectability means the Mad Men lifestyle, some think it means living in a walkable city. The walkable city is capable of containing more than one standard of respectability, because it arranges itself to let people access more potential friends, who could form different social networks. In theory it’s possible to drive an hour in some suburbs and meet many people, but in practice it’s uncommon, for two reasons. First, it requires one car per adult, which is expensive and produces class stratification even in social groups that could be cross-class. And second, in practice the social identity of suburbs in the Northern US is local more than regional – for example, they tend to have smaller, more local schools.

In theory, conservative lifestyles could also be more supported in cities. Haredi Jews are very urban: they need certain community amenities like a kosher supermarket and a mikveh and have to live within walking distance of synagogue; when they suburbanize, it’s en bloc, like the Satmar move to Kiryas Joel or master-planned Haredi cities in Israel, often in the settlements.

In practice, this doesn’t happen. Haredi Jews are notable in being an oppressed minority in Israel as well as around New York. But traditional groups that view themselves as part of the majority end up wanting everyone to live like they do. When the Progressive Movement created the idea of suburbia around 1900, it came out of an explicit desire to assimilate immigrants into what it viewed as proper American values. The Historic American Engineering Record gives background about the politics of the subway both before and after construction. The point of suburbia from the start was to make it impossible to form any culture except the dominant WASP culture.

Not for nothing, urbanism in the United States tends to disproportionately feature people who have other reasons to be dissatisfied with traditional culture. Foremost among these are queers, who led gentrification in the 1970s and 80s, when they weren’t safe in most suburbs and small cities; even this decade, a genderqueer Canadian acquaintance told me that there are parts of the US that they’re scared to be in. Without outing people, I believe that between one third and one half of the people who write online about public transportation or urbanism in the US are queer.

In order to reinforce the notion that only single-family suburbs are the respectable way to live, American society has to denigrate everything else as ridiculous. Parisian apartment buildings feature a hammer and sickle and defenestration; Mediterranean apartment buildings feature gay flamboyance. Were the US more willing to admit that there are educated professionals in some countries that do not need a car, it would need to find ways to accommodate professionals with the same preferences domestically, and that would lead to accidentally accommodating people who are not in the social or cultural mainstream.