I had an interesting interview of the annoying kind, that is, one where my source says something that ends up challenging me to the point of requiring me to rethink how I conceive of transportation networks. On the surface, the interview reaffirmed my priors: my source, a mobility-limited New Yorker, prefers public transit to cars and is fine with walking 500 meters to a bus stop. But one thing my source said made me have to think a lot more carefully about transit network legibility. At hand was the question of where buses should stop. Ages ago, Jarrett suggested that all other things equal (which they never are), the best stop spacing pattern is as follows: 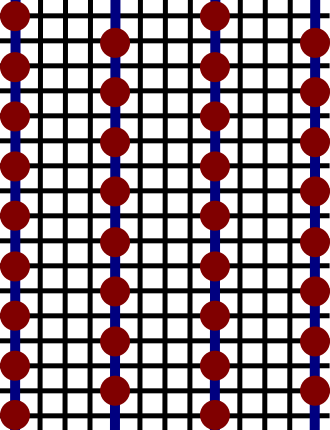 The bus stops on the north-side arterials are offset in order to slightly improve coverage. The reason Jarrett cites this doesn’t occur much in practice is that there would also be east-west arterials. But maybe there aren’t a lot of east-west arterials, or maybe the route spacing is such that there are big gaps between major intersections in which there’s choice about which streets to serve. What to do then? My source complained specifically about unintuitive decisions about which streets get a bus stop, forcing longer walks.

In the case of the most important streets, it’s easy enough to declare that they should get stops. In Brooklyn, this means subway stations (whenever possible), intersecting bus routes, and important throughfares like Eastern Parkway or Flatbush. Right now the B44 Select Bus Service on Nostrand misses Eastern Parkway (and thus the connection to the 3 train) and the M15 SBS on First and Second Avenues misses 72nd Street (and thus the southernmost connection to Second Avenue Subway). However, there is a bigger question at hand, regarding network legibility.

Bus networks are large. Brooklyn’s current bus network is 550 km, and even my and Eric Goldwyn’s plan only shrinks it to about 340, still hefty enough that nobody can be expected to memorize it. Passengers will need to know where they can get on a stop. For the sake of network legibility, it’s useful to serve consistent locations whenever possible.

This is equally true of sufficiently large subway networks. Manhattan subway riders know that the north-south subway lines all have stops in the vicinity of 50th Street, even though the street itself isn’t especially important, unlike 42nd or 34th. In retrospect, it would have been better to have every line actually stop at 50th, and not at 49th or 51st, but the similarity is still better than if some line (say) stopped at 47th and 54th on its way between 42nd and 59th. A bad Manhattan example would be the stop spacing on the 6 on the Upper East Side, serving 68th and 77th Streets but not the better-known (and more important) 72nd and 79th.

There are similar examples of parallel subway lines, some stopping on consistent streets, and some not. There are some smaller North American examples, i.e. Toronto and Chicago, but by far the largest subway network in the world in a gridded city is that of Beijing. There, subway stops near city center are forced by transfer locations (Beijing currently has only one missed connection, though several more are planned), but in between transfers, they tend to stop on consistent streets when those streets are continuous on the grid.

But outside huge cities (or cities with especially strong grids like Chicago, Philadelphia, and Toronto), consistent streets are mostly a desirable feature for buses, not subways. Bus networks are larger and less radial, so legibility is more important there than on subways. Buses also have shorter stop spacing than subways, so people can’t just memorize the locations of some neighborhood centers with subway stops (“Nation,” “Porte de Vincennes,” etc.).

In the other direction, in cities without strong grids, streets are usually not very long, and the few streets that are long (e.g. Massachusetts Avenue in Boston) tend to be so important that every transit route intersecting them should have a stop. However, streets that are of moderate length, enough to intersect several bus lines, are common even in interrupted grids like Brooklyn’s or ungridded cities like Paris (but in London they’re rarer). Here is the Paris bus map: look at the one-way pair in the center on Rue Reaumur and Boulevard Saint-Denis (and look at how the northbound bus on Boulevard de Strasbourg doesn’t stop at Saint-Denis, missing a Metro transfer). There are a number of streets that could form consistent stops, helping make the Parisian bus network more legible than it currently is.

As with all other aspects of legibility, the main benefits accrue to occasional users and to regular riders who unfamiliar with one particular line or region. For these riders, knowing how to look for a bus stop (or subway station, in a handful of large cities) is paramount; it enables more spontaneous trips, without requiring constantly consulting maps. These occasional spontaneous trips, in turn, are likelier to happen outside the usual hours, making them especially profitable for the transit agency, since they reduce rather than raise the peak-to-base ratio. (Bus operating costs mostly scale with service-hours, but very peaky buses tend to require a lot of deadheading because they almost never begin or end their trip at a bus depot.)

The main takeaway from this is that bus network redesigns should aim to stop buses on parallel routes at consistent streets whenever possible, subject to other constraints including regular stop spacing, serving commercial nodes, and providing connections to the rail network. To the extent cities build multiple parallel subway lines, it’s useful to ensure they serve stations on consistent streets as well when there’s a coherent grid; this may prove useful if New York ever builds a subway under Utica and extends the Nostrand Avenue Line, both of which extensions were on the drawing board as recently as the 1970s.