Two days ago, Port Authority put out a study about a rail link to LaGuardia, which became Governor Cuomo’s top transit priority a few years ago. The PDF file is bundled with the RFP, but starting on PDF-p. 25 it’s an alternatives analysis and not an RFP. While transit activists including myself have attacked Cuomo’s proposed rail link for its poor alignment choice, the Port Authority study considers many alternatives, including some interesting ones. It also describes the current situation in more detail than I’ve seen elsewhere. I’d like to talk about the alternatives for a rail link, but also summarize some of the important facts buried in the study. Unfortunately, the study also eliminates all the useful options and prefers to advance only Cuomo’s uselessly circuitous alignment.

LaGuardia had about 25 million O&D passengers in 2017. They disproportionately go to or from Midtown, but it’s not as overwhelming as I thought based on this density map. Here is a precise breakdown, lumping together both locals (33%) and visitors (67%): 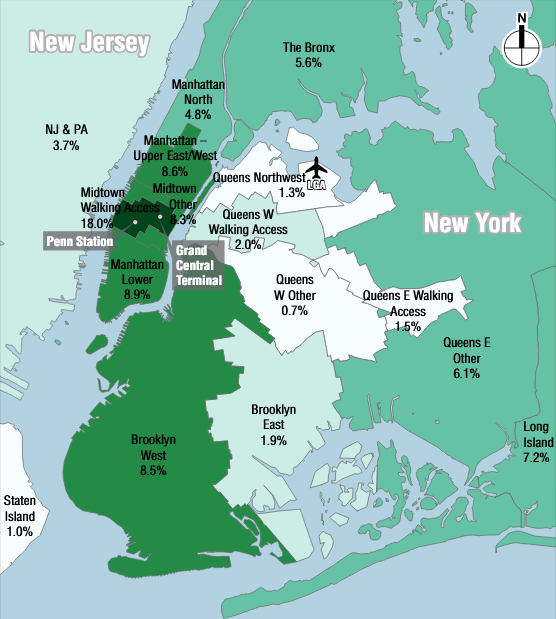 About half of the passengers get to or from the airport by taxi, and another 20% are dropped off or picked up in a car. Only 6.2% use public transportation, and another 5.6% use a shared ride such as a hotel shuttle.

Among employees, the situation is different. I expected employees to cluster in western and central Queens, but in fact, based on the same categories used for passengers, the largest group is Queens East beyond subway range:

There are 13,000 employees at LaGuardia per Port Authority (compared with about 10,000 per OnTheMap), of whom 40% take transit to work and 57% drive. It goes without saying that the transit options are exceedingly harsh. The connections from Brooklyn require taking a subway through Manhattan (and I don’t think LGA is necessarily important enough to justify a direct bus route from Brooklyn, presumably a merger of the B38 with a Q18/Q47 compromise route to the airport). From Queens beyond subway range they require taking a bus to the subway and then another bus. The implication is that people take transit to the airport out of necessity – that is, poverty – and not because the options are good.

Unfortunately, the implication is also that it’s hard to serve the current employee base by any rail link, even if it’s fare-integrated with the subway (unlike the JFK AirTrain). The origins are too dispersed. The best that can be done is serving one tranche of origins, and letting passengers sort themselves based on commute possibilities.

In some strategic places, a decent two-seat ride can be made available. The M60 bus is not good for passengers, but it is fine for employees since more of them come from Upper Manhattan and the Bronx, and moreover low incomes imply that it’s fine to have a transit : car trip time ratio well in excess of 1 provided it’s not too onerous. Some future rail extensions, not covered in the study, would help with passenger distribution: Triboro RX would help get passengers from the South Bronx, Brooklyn, and parts of Queens to major transfer points at Astoria and Jackson Heights, and Penn Station Access with an Astoria stop would help get eastern Bronx passengers into Astoria with a quick transfer.

The study mentions a horde of different options for connecting people to the airport, but most only get a few paragraphs followed by an indication that they don’t meet the objectives and therefore should not be considered further. These excluded alignments exist only for i-dotting and t-crossing, such as ferries or whatever Elon Musk is calling his tunnels this year; Port Authority is right to reject them.

The alternatives proposed for further consideration consist of no build, subway extensions, and various air train alignments. Unfortunately, on second pass, the subway extensions are all eliminated, on the same grounds of community impact. This includes the least impactful subway extension, going north on 31st Street and then east on 19th Avenue, avoiding Ditmars (which could host an el).

Instead of a subway extension, the study is recommending an air train. There are many alternatives analyzed: one from Astoria along the Grand Central Parkway, one from Woodside with a connecting to the local M/R trains on the Queens Boulevard Line at Northern Boulevard, one from Jackson Heights, one from Jamaica with a missed connection to the 7, and one from Willets Point as recommended by Cuomo. All but the last are excluded on the same grounds of impact. Any land acquisition appears to be prohibited, no matter how minor.

The obvious answer to why the study recommends the Willets Point detour is political support. This can be seen in e.g. PDF-p. 150, a table analyzing each of the air train possibilities. One of the criteria is operational concerns. The Jamaica option fails that test because it is so circuitous it would not get passengers between the airport and either Penn Station or Grand Central in thirty minutes. The Willets Point option passes, despite being circuitous as well (albeit less so); it would still not get passengers to Midtown Manhattan in thirty minutes since the 7 is slow, but the study seems to be assuming passengers would take the LIRR, on the half-hourly Port Washington Branch.

This alone suggests political sandbagging. But by itself it doesn’t explain how the study’s assumptions sandbag the options the governor doesn’t favor; after all, there could be many little omissions and judgment calls.

Rather, I propose that the study specifically looked only at nonstop service to the airport. The subway extensions are all proposed as nonstop services from Astoria (either Astoria Boulevard or Ditmars) to the airport, without intermediate stops. Without intermediate stops, the political will to build els above neighborhood streets is diminished, because few people in Astoria have any need to travel to LaGuardia. In contrast, with intermediate stops, the subway extensions would improve coverage within Astoria, serving Steinway and Hazen Streets.

If intermediate stops are desired, then 19th Avenue may not be the best corridor. Ditmars itself is feasible (with some takings), as are 21st and 20th Avenues. Ditmars has the most impact but serves the highest-value location, and can descend to Grand Central Parkway to get to the airport without any tunneling, limiting costs.

Moreover, the impact of els can be reduced by building them on concrete columns rather than all-steel structures. Paris Metro Line 2 opened in 1903, before the First Subway in New York; it has a steel structure on top of concrete columns, and the noise level is low enough that people can have conversations underneath while a train is passing. New Yorkers should be familiar with the reduced noise of concrete structures since the 7 el on top of Queens Boulevard is quiet, but that is an all-concrete structure on a very wide street; Line 2 here follows wide boulevards as well but not so wide as Queens Boulevard, and is moreover a mixture of concrete and steel, and yet manages not to have the screeching noise New Yorkers are familiar with from Astoria, Woodside, and other neighborhoods with els.

Is this study valuable?

Yes and no. Its conclusions should be tossed for their limited scope (nonstop airport access only), questionable assumptions (overreliance on infrequent commuter rail), and political aims (justifying Cuomo’s decision). But some of the underlying analysis, especially of current travel patterns, is useful for the purposes of thinking about systemwide transit expansion. Despite the consideration of an N/W extension, the study does not try to figure out the percentage of travelers whose ultimate origin or destination is near an N/W stop, only near a 7 stop; however, we can make some educated guesses from the map and realize that an N/W extension is of considerable value to passengers.

For employees, the situation is more delicate. The study mentions them but doesn’t try to optimize for them – the aim is to give Cuomo political cover, not to design the best possible public transit for New York. But the dispersal of worker origins means that a single rail link to the airport is unlikely to have much of an effect. Better everywhere-to-everywhere transit is needed. With decent bus connections at Astoria and Jackson Heights, it’s more important to build circumferential transit there (that is, Triboro) than to connect directly to the airport.

A general program of transit expansion would serve both groups. An N/W extension through Astoria with intermediate stops would give the neighborhood better coverage while also connecting the airport with Manhattan destinations, with good transfers to origins on the Upper East and West Sides. Better circumferential transit would then let workers from different parts of the city use the same extension without having to detour through Midtown even if their origins are in the Bronx or Queens.

Can any of this happen? The answer is unambiguously yes. Even in New York, els and at-grade rail is not so expensive. The only real question is whether good transit can happen while the state is governed by a do-nothing administration, headed by a governor who is more interested in a signature project than in improving transportation for his hapless subjects.