Berlin has a deceptively simple S-Bahn network. There’s the Ringbahn circling city center. There’s the elevated east-west Stadtbahn, which has two tracks dedicated to S-Bahn service and two for everything else, including longer-range regional trains and intercity trains. And there’s the two-track North-South Tunnel, which only carries S-Bahn traffic; longer-range traffic uses the four-track north-south mainline through Berlin Hauptbahnhof, whereas the North-South Tunnel intersects the Stadtbahn one station east of Hauptbahnhof, at Friedrichstrasse.

The main S-Bahn capacity needs in Berlin are east-west; meanwhile, the North-South mainline is underfull, with Wikipedia listing around 7 trains per hour. And yet, Berlin’s big S-Bahn capital project is a new tunnel, dubbed S21, adding yet another north-south track pair through Hauptbahnhof. Fortunately, the project is salvageable, but only if the city and the federal government act quickly, within a few years, to change yet-unbuilt phases to run in the right direction.

Here is a map of traffic demand on every interstation on the combined Berlin U- and S-Bahn network (source, p. 6): 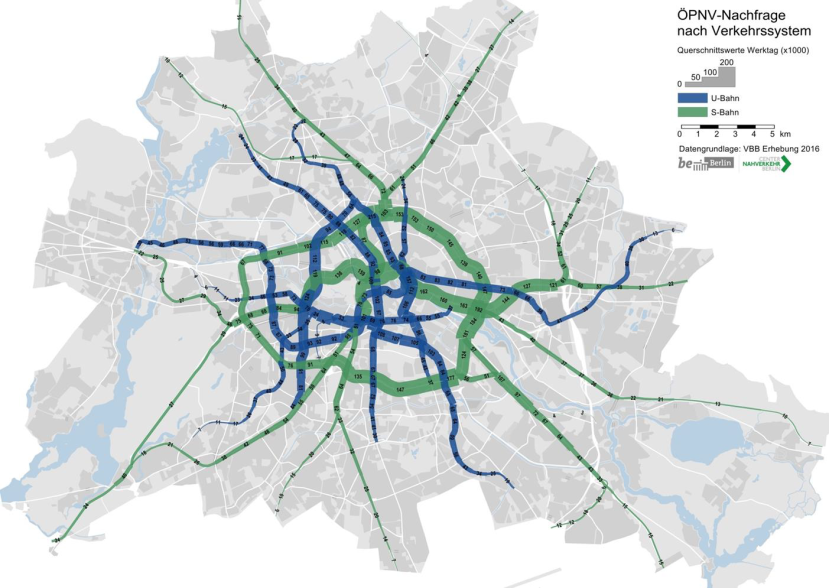 The numbers are in thousands of passengers per weekday in both directions combined.

The U-Bahn is in blue. It’s a weird-looking network because two lines (U7, running northwest-southeast in the west, and U9, running north-south also in the west) were built in the Cold War to serve West Berlin’s center around Kurfürstendamm, whereas the S-Bahn and the older U-Bahn lines serve the historic center. Since reunification, Germany has made an effort to move the Berlin central business district back to the historic center, and S21 is to reinforce that, serving the western end of Mitte.

Unfortunately, as we see in the green lines, that’s not where the pressing S-Bahn capacity needs are. First, the Stadtbahn is busier than the North-South Tunnel. Second, the busiest branches heading into the city come from the east, with substantially more traffic than from the north and south.

S21: what Berlin is actually building

Berlin Hauptbahnhof is a new station. It only opened in 2006, when the North-South Intercity Line opened. The new four-track line has ample capacity for additional S-Bahn traffic, but nonetheless it hosts no S-Bahn trains in regular service. Instead, there are plans for two additional S-Bahn tracks, mostly in tunnel, parallel to the line, with service to Hauptbahnhof:

The map does not show the phasing. The segment from the Ringbahn in the north down to Hauptbahnhof is just about complete, with opening expected soon. The segment from Hauptbahnhof to Potsdamer Platz, which contrary to the map is to be nonstop, is in early stages of construction, and Wikipedia says it is expected to open in 2023.

Farther south of Potsdamer Platz is still not under construction, and frankly should not be built as is. The only real addition this would give to the network is the stop at Gleisdreieck, where the line intersects the east-west U1; the North-South Tunnel intersects U1 without a connection, the only place in the city where there is a missed U-Bahn/S-Bahn connection unless one counts the marginal U9/Stadtbahn miss in which the next station, Zoologischer Garten, is a transfer.

However, the North-South Main Line’s tunnel portal lies just south of Gleisdreieck, and thus it should be feasible if nontrivial to add platforms there for two of the tracks. Farther south, at Yorckstrasse, it is well outside the portal and adding platforms should be fairly easy.

Görlitz Railway S-Bahn: what Berlin should be building

A radial rail network with three lines should aim to have them meet at a triangle in city center. Berlin has two S-Bahn radial lines, and S21 is to add a third. Instead of running parallel to the North-South Tunnel, it should provide a third trunk line. North of Potsdamer Platz the route is already baked in, but farther south, the Görlitz Railway route is a perfect legacy line to link to. It is quite busy, and the likely locations of the intermediate stops between existing infrastructure and Potsdamer Platz are busy U-Bahn stations in their own right.

I was delighted to see this already discussed on the technical transit blog Zukunft Mobilität. It has a long list of potential Berlin rail extensions, some in accordance with current long-term plans, some not. It specifically criticizes S21 for duplicating existing infrastructure, and proposes an extension to the southeast, mentioning that there were plans to that effect in the 1930s. There are two variants, one through Hermannplatz and one through the old route of the Görlitz Railway.

The dashed lines denote under-construction lines, including S21 to Potsdamer Platz, the 4.5-kilometer Siemens Railway to the northwest, and the U5-U55 connection. Dotted lines denote lines I am proposing: either variant connecting S21 toward the southeast, paired with the Siemens Railway as well as two new-build lines through the area of Tegel Airport, which is slated for redevelopment after the Berlin-Brandenburg Airport finally opens. Two branches are depicted toward Tegel, one toward airport grounds to be redeveloped, and one going farther north taking over S25; there are already discussions of a rapid transit line to Tegel, branching off of U6, but this option does not force the outer parts of U6 to contend with reduced frequency.

The two branches should of course not both be built. The main advantage of the southern option is that it hits Hermannplatz, one of the busiest stations in the system: the above diagram of rail ridership shows a large change in U8 demand north and south of the station, and a factsheet from 2010 asserts that it is the second busiest U-Bahn station, closely behind Alexanderplatz. In effect, it functions as an express link from Neukölln to city center. U8 isn’t especially crowded – nothing in Berlin is – but it’s busiest than the North-South Tunnel; this link is at least as justified as the S21 tunnel to the south. This would require about 7 km of tunnel. While S-Bahn tunnels cost more than U-Bahn tunnels, this is deliberately an express line, so keeping costs down to the per-km level of the U5-U55 connection (€525 million for 2.2 km) is reasonable, making it a €1.8 billion project or thereabout.

The northern option works differently. It doesn’t hit anything as interesting as Hermannplatz on the way, but it does serve Alt-Treptow, one of the bigger rapid transit deserts inside the Ring. The infill station would also break what is the second or third longest interstation on the Ring. Closer in, it has better coverage in the center – Checkpoint Charlie offers another CBD station in addition to Potsdamer Platz. The cost is more of an open question here. From Görlitzer Bahnhof to Potsdamer Platz it’s about 4 km; east of Görlitzer Bahnhof it’s plausible that the line could reuse the Görlitz Railway’s right-of-way and run elevated, or at worst underground with cut-and-cover. However, the per km cost of the tunnel would be higher, since proportionately more of it is in city center, and it has the same number of stations over shorter length; my vague guess is somewhat less than €1.5 billion.

The Berlin S-Bahn would become a system with three radial lines, meeting at Hauptbahnhof, Friedrichstrasse, and Potsdamer Platz. All reverse-branching would cease: the various branches on the Görlitz Railway, including the existing ones as well as an under-construction one to the airport-to-be, would feed into the S-Bahn trunk, rather than to the Ring or the Stadtbahn. The removal of S25 from the North-South Tunnel would create space for the S8 and S85 services in Pankow to use the North-South Tunnel instead of diverting to the Ring and Görlitz Railway. Potentially, the North-South Tunnel could also be realigned to serve Gleisdreieck, as depicted on the map. Finally, with S9 removed from the Stadtbahn, there would be room to beef up service on S3 and/or end the current practice in which S75 trains from the east stop at Ostbahnhof rather than running through.

Writing about North America, I talk a lot about how it can Germanize its regional rail network. But it’s important to understand that while far better than North America, Germany is not perfect. It makes mistakes of many kinds: some involving high construction costs, some involving schedule slips, some involving unnecessary prestige projects. These can mostly be prefaced by “by Continental standards,” though the Berlin-Brandenburg Airport disaster is bad even by the standards of the Anglosphere and its billion-dollars-per-kilometer subways.

The Berlin S-Bahn is a case in point. It has a pretty hefty peak-to-base ratio by German standards – the Ring lines (S41 and S42) run every 5 minutes peak and every 10 off-peak, and a number of other lines have a peak-to-base ratio of 2 as well. It also has a peculiarity in that S75 trains only run east of Ostbahnhof; I can’t tell if there’s a problem with track capacity or demand mismatch, but if it’s the former then it’s strange since peak S-Bahn traffic on the Stadtbahn is only 18 trains per hour (Munich achieves 30 through its central tunnel, with much higher crowding levels), and if it’s the latter then it’s again strange – why not run through to Westkreuz like S5?

S21 is another of these little mistakes. It’s a prestige project on the heels of the construction of Hauptbahnhof, rather than a solution to a transportation need. There are six north-south tracks through Berlin between the S-Bahn and the mainline and they’re not anywhere near capacity; the mind boggles at why anyone would add seventh and eighth tracks before adding fifth and sixth east-west tracks.

Fortunately, the mistake is fixable. Germany’s dragging infrastructure timeline means that there’s often room for modifications to make things more useful. The airport is a lost cause, but S21 is not. From Potsdamer Platz south there’s a good option that adds S-Bahn service exactly where it is needed and simplifies citywide schedules by making it feasible to eliminate reverse-branching. In lieu of building more autobahns, Berlin should commit to building the southeastern extension via Alt-Treptow or Neukölln.