If Swiss planners were hired to design an intercity rail network for New York State, they might propose something that looks like this: 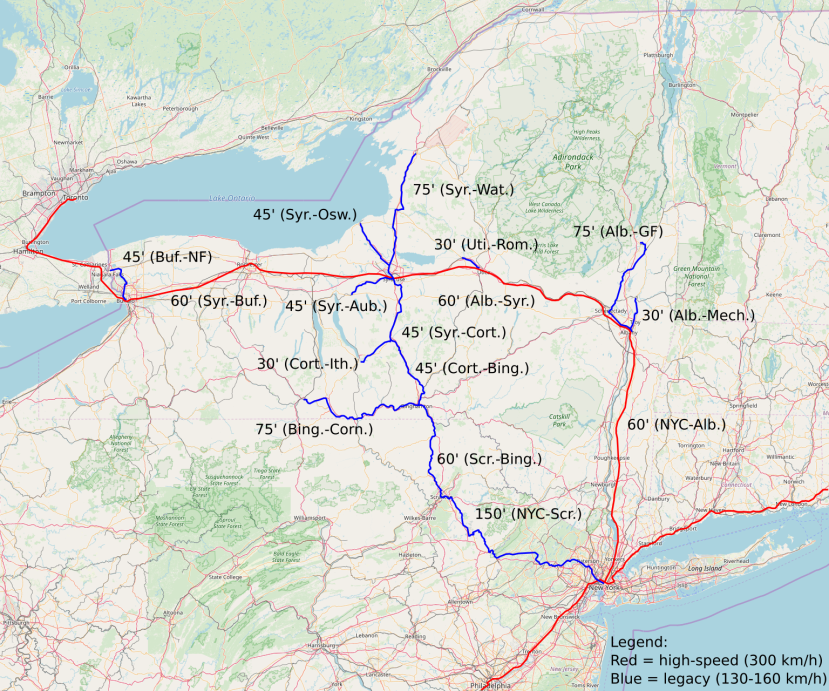 The trip times depicted on the map are a few minutes longer than intended, especially next to a terminus station like Niagara Falls, Watertown, and Ithaca. The depicted times are inclusive of turnaround time: the 45-minute Buffalo-Niagara Falls line is intended to take around 35 minutes in actual service, with 10-minute turnarounds.

Swiss planning is based on hourly and half-hourly timetables repeating all day on a clockface pattern: if a train leaves your station at 8:24 am, a train will leave your station at xx:24 all day, and if the line runs every half hour then also at xx:54. Moreover, at major nodes, trains are timetabled to arrive a few minutes before the hour and depart a few minutes after, letting passengers connect between different trains with minimal wait. To minimize transfer time and turn time, trains run as fast as necessary – that is, the state invests in higher-speed lines to ensure connections between major cities take a few minutes less than an hour. The Bahn 2000 program set up connections between Zurich, Basel, and Bern taking just less than an hour, with a few further connections elsewhere taking just less than an integer number of half-hours; the Bahn 2030 program aims to do the same with more cities all over the country.

The above map is an adaptation of the concept to New York State. I hope the explanation of how to adapt Switzerland to New York will be of interest to rail advocates elsewhere – the differences between the two geographies matter elsewhere, for example in Germany, France, or Sweden, or for that matter in California or New England.

There is no high-speed rail in Switzerland, unless one counts the mixed passenger and freight rail tunnels through the Alps, which allow 250 km/h passenger trains. The Bahn 2030 planning calls for a 2-hour trip time between Zurich and Lugano, a distance of about 170 km, even with heavy tunneling under all significant mountains; with so much tunneling, 1.5-hour trips are easy and even 1-hour trips are feasible with a bypass around Zug. Clearly, even when higher speeds are allowed, Swiss planning sticks to low- and medium-speed rail, targeting an average speed of about 120 km/h.

This works for Switzerland, a small country in which even Geneva is only 2:45 from Zurich. In New York, it does not. At the speed of upgraded legacy rail, comparable to the Northeast Corridor, the links on the above map along the high-speed spine would take 2 hours each rather than an hour. New York-Buffalo trains would take 6 hours, too long for most travelers, and New York-Rochester would take 5 hours, which is marginal at best. Trains doing New York-Albany in 2 hours could get fairly popular, but even that is long enough that cutting it to just less than an hour is feasible.

Trains are to run every half hour, with the exception of urban lines, namely Buffalo-Niagara Falls, Albany-Troy-Mechanicsville, and Utica-Rome, which run every 15 minutes. The reason for the half-hourly frequency is that all lines need it for either capacity or ridership. The lines either run to New York, which is so big it can easily fill a train every half hour and perhaps even every 15 minutes, or are quite short, so that running only every hour reduces ridership and it’s better to run shorter trains every 30 minutes.

The only worry with quarter-hour trip times is that every cycle must sum up to an integer number of half-hours, not quarter-hours. Otherwise, some connections are broken, offset by 15 minutes. Thankfully, the only cycle on this map is New York-Albany-Syracuse-Binghamton-New York, which takes 7 hours.

Syracuse is depicted as having the most expansive regional rail network in the state, despite being the smallest of Upstate New York’s four major metropolitan areas. The reason is that the goal of the planned network is to provide intercity rather than local service. Rochester has some useful urban lines, for example to Freeport or northwest to the lakefront, but they are so short that they should run every 10 or 15 minutes and not every half hour. However, Rochester has no significant independent towns within an hour or so by rail, and thus there are no timed connections there. In contrast, Syracuse is located right between Watertown, Oswego, Auburn, and Cortland with its connection onward to Ithaca.

The Syracuse system is intended to be fully on the RegionalBahn side of the S-Bahn vs. RegionalBahn divide. The shared segment between Syracuse and the split between the lines to Oswego and Watertown is not meant to overlay to run frequent urban service. Instead, trains should tailgate, followed by a gap of nearly half an hour. Syracuse-bound trains may well call at Liverpool at :20 and :22, arriving at Syracuse at :25 and :27 to exchange passengers with other trains and then continue south, one of Oswego and Watertown paired with Cortland and Binghamton and the other terminating. If north-south S-Bahn service is desired, trains should be slotted in between the intercity trains.

As in Switzerland, the low-speed lines do not necessarily slavishly adhere to legacy alignments. However, the deviations are not the same. Switzerland uses bypasses and tunnels to speed lines up. In New York, the main mechanisms to speed up lines are electrification, track renewal, and higher superelevation. Tunnels are too expensive for the population density of Upstate New York. I can see some bypasses, potentially getting Syracuse-Cortland and Cortland-Binghamton down to 30 minutes each, but none of the Upstate cities off the high-speed line is big enough to justify major civil works.

The one depicted bypass on a blue-colored line is the use of the Boonton Branch in New Jersey to offer an express bypass around the Morristown Line with its dense station spacing. This requires some additional tracks on busy urban regional lines as well as a short tunnel in Paterson, but New York is big enough that investing in faster service to Dover, Delaware Water Gap, and Scranton is worth it.

Upstate, the important deviations involve restoring old tracks, including between Cortland and Ithaca and within some town centers. Corning and Glens Falls both have disused rail alignments serving their centers better than the existing freight lines. But most importantly, Syracuse has an underused freeway running east-west through its center, which I am assuming replaced with a rail line. This is not a new idea – Syracuse is already removing a branch of the freeway, which should be used for a rail connection toward Binghamton, and even the mainline is a vestige of when midcentury planners thought Upstate cities would keep growing. The current Syracuse station is at an inconvenient location, making rail realignment a good use of the right-of-way.

New York State is much more integrated with its neighbors than Switzerland – it’s all the same country. There is extensive interstate travel, and rail planning must accommodate this. Forget the Deutschlandtakt – an Americatakt would be the most complex rail plan in a developed country out of sheer size. Thankfully, the connections depicted on the New York State plan accommodate interstate travel fairly well.

Going east, there are connections to Vermont, Massachusetts, and Connecticut. Albany-Boston can be done in around an hour, which makes for a half-hour takt connection between Albany and Springfield and 45 minutes minus turnaround between Springfield and Boston. Springfield-New Haven is 30 minutes by high-speed rail or 45 minutes by fast legacy rail, both with a stop at Hartford and few to no others; Springfield can then get its own small regional rail line toward Northampton (with some urban overlays for an S-Bahn) and Greenfield. Vermont can get a slow line to Rutland, and/or a fast line to Burlington continuing to Montreal; thence New York-Montreal and Boston-Toronto trains can be timed to connect at Albany, with New York-Toronto trains slotted in between, timed to connect only to the more frequent urban lines like Buffalo-Niagara Falls.

Going south, New York is separated from Pennsylvania by the northern reach of the Appalachians, called the Southern Tier in New York and the Northern Tier in Pennsylvania. This area had many coal mines in the 19th century and as a result has many legacy rail lines, but they are curvy and connect villages. But Scranton is a significant city on a nice line with Allentown and Philadelphia; unfortunately, the Philadelphia-Allentown line stretches via Reading and the Allentown-Scranton line is hilly and curvy, justifying some greenfield construction with some tunneling near the northern end.

Finally, going west, the I-90 route serves Erie and the Midwest. But this is a plausible high-speed rail connection toward Chicago, and so no low-speed interface is needed within the state. Erie could get a line to Youngstown and Pittsburgh, but it would be slower than connecting between high-speed trains in Cleveland; the largest city between Erie and Youngstown is Meadsville, population 13,000.

The cost of the high-speed spine is considerable, but if New York can keep it to the level of France (around $25 million/km), or even Germany (around $35 million/km), the benefits should exceed the costs. New York is huge, and even though nothing in Upstate New York is, the combined populations of Syracuse, Rochester, and Buffalo would add up to a big French or German city. And then there is Toronto at the other end, anchoring everything.

Technically, all of this is feasible. Good transit advocates in the Northeastern United States should push elected officials at the federal and state levels to quickly plan such a system and aim to begin construction early this decade. Bahn 2000 was supposed to take the 1990s to be built, but was delayed to 2004; this is a bigger program but can still happen by 2030 or so.

The trip times, frequencies, and coverage chosen for the map are deliberately conservative. It’s possible to squeeze higher speed at places, and add more branches to smaller towns, like Rochester-Niagara Falls or Buffalo-Jamestown. Bahn 2000 is followed up with Bahn 2030 or Bahn 2035, and likewise rail improvements can accrete in the United States. But as a starter system, this is a solid network connecting all large and nearly all small cities in New York State to one another with maximum convenience and minimum hassle. I hope state planners take heed and plan to invest soon.