I’ve been looking at a lot of big city metro maps recently while checking the construction cost database line by line, and I noticed a regrettable pattern in a number of megacities: they’re so big their metro networks have multiple circles in service or under construction, and instead of neat concentric circles they have overlaps.

What are overlapping circles? 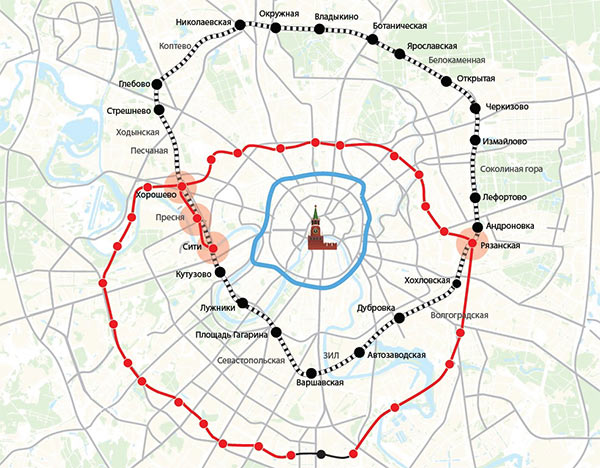 The reason for this is that the Central Circle uses a legacy regional rail alignment. In isolation, with no legacy rail to speak of, circles tend to be more orderly, as in Beijing with its two concentric circles (Lines 2 and 10). However, if there is a legacy alignment, it may not be perfectly aligned with where, absent any legacy rail, it would make the most sense to place an orbital. This is the case above in Moscow: the Central Circle is close to the Circle Line in the south but abuts farther away in the north, and the Big Circle Line is built to be the opposite.

This is not unique to Moscow. Here is Tokyo: 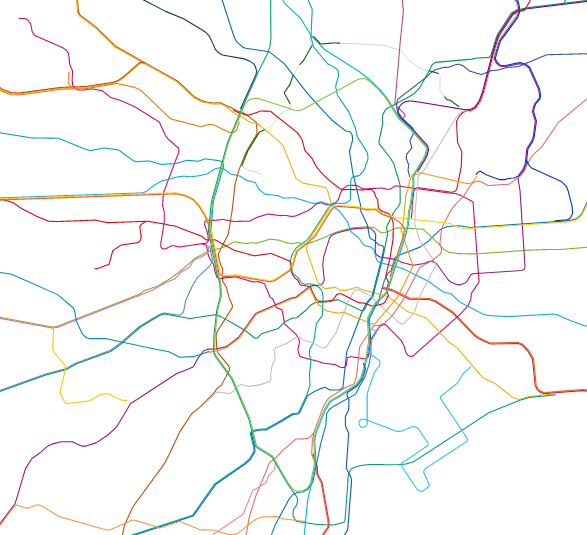 The Oedo Line, in magenta, is a ring with a tail. The Yamanote Line, in light green, is a full ring, taller than it is wide so as to really be two north-south lines joined at both ends.

Why is this bad?

The point of a circumferential line is to provide public transit in the orthogonal direction to that of city center. This has any of the following uses:

This works best if the circumferential service is at approximately equal radius from the center. If it is not, then some segment of it may be partially radial, which means it will have all of the problems of radials (peakiness) and none of the benefits (service to city center). In extreme cases, an operational circle may literally pass through city center, as is the case for the Yamanote Line, or a nominal circumferential may pass close enough to count, as is the case for the East London line at Shoreditch, and then the problem is that one side of the region doesn’t get any circumferential service, that is Shitamachi and East London.

If there are multiple circles, then all of the above aspects get better if those circles are concentric, for the same reason. Having many circumferential lines closely parallel to each other can create a local grid in an especially large city; I proposed such a system for Lagos, which is both enormous and a tabula rasa.

Why does this keep happening?

The Moscow Central Circle and the Yamanote Line are both historic legacy commuter lines. Paris is in a similar situation, except the legacy is more recent and evolved over a generation: plans for a circumferential line beyond the M2/M6 ring go back generations, but nothing was done until recently, and the first effort in that direction was the early tramways. So there’s an incomplete ring formed by T1 and T2, another incomplete ring formed by T3, and the under construction M15 ring, the M15 ring intersects the T1/T2 ring because the T1/T2 alignments were based on where convenient surface roads or rights-of-way were available.

That this is so common in the largest cities in the world does not mean it is good. Sound prior planning should figure out locations for such circles in advance. In the case of Paris, there could have been the M2/M6 ring, and then the T3 ring beyond it (as a subway, not light rail) replacing the closely parallel Petite Ceinture, which is no longer useful since the radial Métro lines don’t have stops at the correct locations, and then the M15 ring, and then the orbital tramways of the Grande Ceinture. But I’m not going to use the incompetence tag if in the 1980s a city isn’t sure what its rail network will look like in the 2030s.

In a way, it’s like missed connections between metro lines. It comes from bad planning. It’s hard to avoid – the largest metro network without missed connections is Mexico City, which is unusually poor in radial lines, and even networks that have very few of these, like Paris, Beijing, and Seoul, keep building more. Overlapping circles are likewise present in Tokyo, Moscow, and soon Paris, and absent in only one city with multiple circles, the near-tabula rasa Beijing. However, planners should still aim to avoid this network awkwardness, figuring out network designs well in advance that create neat radials with city center meets and concentric circles for circumferential service.